Our Patron - St Brigid of Ireland 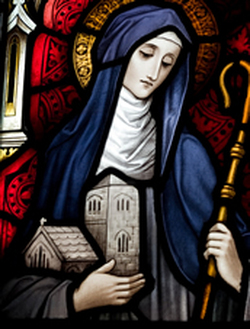 Brigid was probably born at Faughart near Dundalk,  Louth, Ireland. Her parents were baptized by St. Patrick, with whom she developed a close friendship. According to legend, her father was Dubhthach, an Irish chieftain of Lienster, and her mother, Brocca, was a slave at his court.  Even as a young girl she evinced an interest for a religious life and took the veil in her youth from St. Macaille at Croghan and probably was professed by St. Mel of Armagh, who is believed to have conferred abbatial authority on her. She settled with seven of her virgins at the foot of Croghan Hill for a time and about the year 468, followed Mel to Meath.

About the year 470 she founded a double monastery at Cill-Dara (Kildare) and was Abbess of the convent, the first in Ireland. The foundation developed into a center of learning and spirituality, and around it grew up the Cathedral city of Kildare. She founded a school of art at Kildare  and its illuminated manuscripts became famous, notably the Book of Kildare, which was praised as one of the finest of all illuminated Irish manuscripts before its disappearance three centuries ago.


Brigid was one of the most remarkable women of her times, and despite the numerous legendary, extravagant, and even fantastic miracles attributed to her, there is no doubt that her extraordinary spirituality, boundless charity, and compassion for those in distress were real. She died at Kildare on February 1. The Mary of the Gael, she is buried at Downpatrick with St. Columba and St. Patrick, with whom she is the patron of  Ireland. Her name is sometimes Bridget and Bride. Her feast day is February 1.

The above information was sourced from the Catholic Online website - www.catholic.org

The St Brigid's Cross
Making a St. Brigid’s cross is one of the traditional rituals in Ireland to celebrate the beginning of early spring, February 1. The crosses are made of rushes that are pulled rather than cut. They are hung by the door and in the rafters to protect the house from fire and evil.

St. Brigid and her cross are linked together by the story that she wove this form of cross at the death bed of either her father or a pagan lord, who upon hearing what the cross meant, asked to be baptized. One version goes as follows:

A pagan chieftain from the neighborhood of Kildare was dying. Christians in his household sent for Brigid to talk to him about Christ. When she arrived the chieftain was raving. As it was impossible to instruct this delirious man, hopes for his conversion seemed doubtful. Brigid sat down at his bedside and began consoling him. As was customary, the dirt floor was strewn with rushes both for warmth and cleanliness. Brigid stooped down and started to weave them into a cross, fastening the points together. The sick man asked what she was doing. She began to explain the cross, and as she talked his delirium quieted and he questioned her with growing interest. Through her weaving, he converted and was baptized at the point of death. Since then the cross of rushes has been venerated in Ireland.

The above information was sourced from the Cross & Crucifix website- www.crosscrucifix.com
Prayer to St Brigid
Saint Brigid,
You were a woman of peace,
You brought harmony where there was conflict.
You brought light into the darkness.
You brought hope to the downcast.
May the mantle of your peace
Cover those who are troubled and anxious,
And may peace be firmly rooted
In our hearts and in our world.
Inspire us to act justly and reverence all God has made.
Brigid, you were a voice for the wounded and the weary.
Strengthen what is weak within us.
Calm us into a quietness that heals and listens.
May we grow each day into greater wholeness -
In mind, body and  spirit.
Amen.